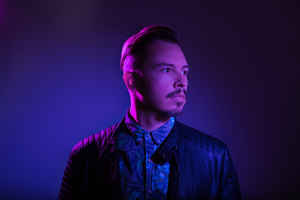 International DJ, producer and remixer Tino Piontek aka Purple Disco Machine has been on a whirlwind of a musical journey since the conception of his Deep Funk branded Disco House music project in 2009.
The Dresden-born Deep Funk innovator has racked up numerous achievements, although it was his 2013 breakthrough hit ‘My House’, on OFF Recordings, that really propelled PDM onto new heights; landing the No.1 Spot within Beatport’s Deep House chart and, at its peak, No.3 overall. The track remains one of Beatport’s best ever sellers and PDM ranks #18 in the platforms All Time Top 100 Artists chart. Proving he’s was no one-hit-wonder, the German native recreated his previous chart domination over the next 3 years with a series of classic original tracks including his collaborations with Boris D’lugosch on Defected, L.O.V.E. and ‘Set It Out’, his collaborations with Aeroplane on Spinnin’ Deep, ‘Sambal’ and ‘Counting On Me’, his incredible double ‘Pete Tong Essential New Tune’ the ‘Yo EP’ on Kittball and the unforgettable ‘Magic’ on Exploited.
With chops like this it was no wonder that the global A&R teams came knocking for Purple Disco Machine to add his magic to their releases. Over the last 3 years he has unleashed remix bomb after remix bomb for global music Artists.
Accolades picked up on the way include being named Traxsource ‘Artist Of The Year 2015’ and influential dance music blog Magnetic Man going so far as to say that ‘‘If 2015 had a shape and a sound, it would be a Purple Disco Machine.’
BBCR1 have acknowledged his class by rewarding him with both a ‘Pete Tong After Hours Mix’ and a ‘Pete Tong Future Star’ feature alongside an ‘Annie Nightingale Quest Mix’.
However, it’s important to mention that Purple Disco Machine’s impressive Deep Funk grooves might not have even existed if it wasn’t for his father introducing him, at an early age, to the classic funk sounds of the 70s and 80s. This early exposure had real influence on Tino and by the time he was a teenager, he didn’t just want to listen to great music but also play it, produce it and be connected to the scene.
Tino says “This was a really important time for me as I managed to land a job at a local record store and gain a DJ residency at my local club in Dresden. Neither job paid me any money but I could have as many vinyls as I wanted from the record shop, so I had more than enough new music to play out on the weekend.”
With a rapidly expanding record collection and a DJ residency on-going, Tino craved to make his own music thus spending many years in the studio honing his sound and releasing tracks via a number of different projects/pseudonyms before giving birth to Purple Disco Machine.
Outside the studio, Tino is a very in-demand touring DJ and his schedule has never been busier. Bringing his unparalleled Deep Funk sounds and unique mix of Disco, Nu Disco, Funk, House and Deep House straight to the dancefloor at some of the world’s finest clubs festivals and events in countries. Purple Disco Machine is a longstanding resident at the hugely successful ‘Glitterbox’ events in Ibiza and beyond and this year will make his debut at Pacha on the White Isle.
This year will be an extra special year though because as well as a jam-packed gigs calendar the Purple Disco Machine début artist album is set to drop in September via Australian powerhouse Sweat It Out Records.
(From purplediscomachine.com)