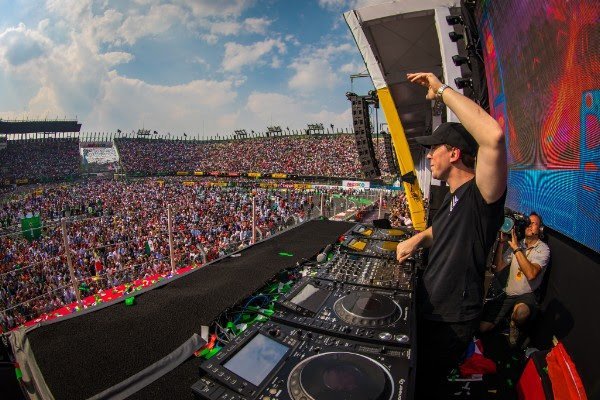 Performing on the F1 podium at the Formula 1 Gran Premio de Mexico for Heineken’s ‘More Than A Race’ campaign, Hardwell once again managed to set the stage ablaze!

Pushing the boundaries of achievement even further, the two-time world’s #1 DJ, Hardwell, performed the first-ever DJ set on a Formula One podium as part of Heineken’s ‘More Than A Race’ campaign. The Formula 1 Gran Premio de Mexico, which took place on Sunday, saw attendees in abundance as both motorsport and music fans across the world tuned in to watch Hardwell perform. Partnering up with Heineken’s ‘More Than A Race’ campaign, Hardwell closed the Mexico Grand Prix with an unprecedented bang. Hardwell fans across the world were in for a massive surprise as they could watch all the action on race day live via Hardwell’s Facebook page.

Speaking about the opportunity, Hardwell said “Being asked to be a part of a world first for F1 was a very special feeling. It was an honour to be invited by Heineken and Formula 1 organisation to play an F1 podium for the first time in Grand Prix history. It was a thrill to be there on race day and I loved every minute playing for to the F1 fans in Mexico City on the Grand Prix on Sunday!”

Hans Erik Tuijt, Director, Global Heineken Sponsorship, added, “Hardwell’s performance on the podium at the Formula 1 Gran Premio de Mexico epitomises Heineken’s More than a Race campaign. We’re aiming to open the sport up to fans globally, on the premise that F1 is not just a two-hour race, but a 72-hour spectacle of glamour and excitement taking place in some of the world’s greatest cities. Hardwell certainly lit up the post-race celebrations to the 50,000 strong crowd, plus the millions of fans watching it live on TV, Facebook LIVE and digital media all over the world.”